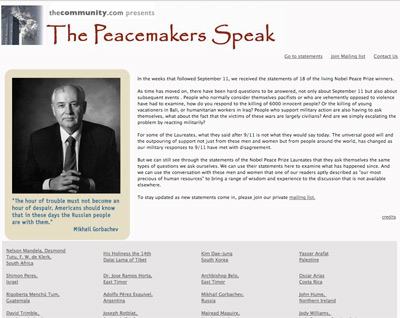 TheCommunity.com stepped onto the world stage in 2001, when Mary Wald and Nobel laureate José Ramos-Horta collected and published the statements of 18 of the then 24 living Nobel Peace Prize winners in response to 9/11. The page was enhanced with photography from Michael Collopy, still the “go to” photographer for TheCommunity.com and the Nobel laureates today.

In 2001 Yahoo! was the leading search engine. Flooded with traffic from around the world, from people seeking information on the shocking events. Yahoo! built what was the first “big news page” — a page devoted solely to news stories related to 9/11.

Yahoo! featured the Nobel laureates’ site — http://thecommunity.com/crisis — prominently throughout this period, at times posting four different links to the site on their big news page, driving the site’s first rush of international traffic. Associated Press then ran a story on the site, which was picked up around the world, running not only across the US but in the Hong Kong Morning Post, the Malaysia New Straits Times, and on six continents.

The site was discussed on the CNN Morning Show, written about in the Washington Post, the Chicago Tribune, Seattle PI, LA Times, and many, many more. It was featured on the home page of AOL and referred to in many of the ongoing discussions about 9/11.