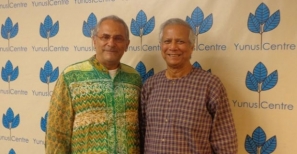 Muhammad Yunus has called the Muslim Rohingya population in Myanmar “the most persecuted people in the world.” He and José Ramos-Horta, writing for Huffington Post, said today that the treatment of this minority will be the proving ground for Myanmar’s democratic reforms.

The article, edited and placed by Mary, points out that “One of the fundamental challenges of a democracy is how to ensure the voice of the majority does not trample the essential rights of the minority. In the founding of the United States this was addressed by the Bill of Rights, some form of which is integrated into most democracies today.

“Even as we applaud and rejoice in the new freedoms enjoyed by the Myanmar people, the country’s newly elected government must face this challenge as they evolve from autocratic rule into a democratic state. The tragedy of the Rohingya people, continuing to unfold in Rakhine State in the country’s western corner, on the border of Bangladesh, will be its proving ground.”