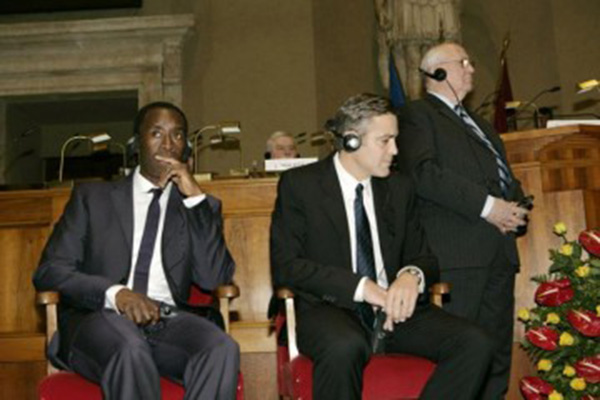 The 2007 Man of Peace Award at the World Summit of Nobel Laureates was presented to George Clooney and Don Cheadle in recognition of their outstanding work for peace in Sudan.

Now recognizing the immense press potential for the award, Mary worked directly with Mr. Clooney’s and Mr. Cheadle’s teams to create a collaborative effort to maximize this potential.

A prerelease announcement was done on the award and covered by virtually all US entertainment media and creating a growing “buzz” around the award. At the same time, in the lead up to the award, Mary coordinated with the office of the Secretary General of the UN to identify the message that would be most beneficial to Sudan.

The message was pinpointed as the need for helicopters to back up
the UN Peacekeeping Mission in Sudan.

The night before the award Mary organized a strategy meeting with George, Don, George’s publicist, and John Prendergast from the Enough Project.

She then organized a press conference to be held after the award presentation, while media from around the world were present to cover the presentation of the award.

The award presentation was done in the morning of the opening of the Summit. Immediately after the award, the media were gathered for the press conference on Sudan with George and Don.

Within one hour, the story had exploded, literally around the world on six continents, with more than 6000 articles online alone, with additional coverage in print newspapers and magazines on six continents, and coverage on virtually every major entertainment media outlet in the US.

But importantly, beyond simply being a photograph and a few words from a celebrity and Nobel laureates, the 2007 Man of Peace award became a hard hitting message for the need for governments to step forward and provide very real assistance to the business of peace, in the form of badly needed helicopters.

Following the events surrounding the award, both George and Don then took time to tape interviews with TheCommunity.com’s Youth Ambassador Larissa Abaunza on the subject of what kids can do to help Sudan.