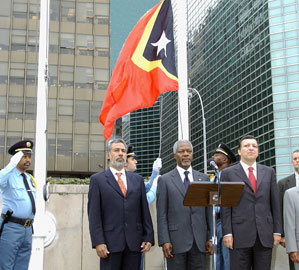 On September 27. 2002, East Timor was inducted into the UN as the newest member nation of the millenium. The country’s flag was raised for the first time at the UN headquarters in New York.

Attending the ceremonies as a part of the East Timor delegation, Mary co-hosted a VIP luncheon in UN headquarters for the Timorese President, Xanana Gusmao, Prime Minister and then Foreign Minister José Ramos-Horta.