International Webcast: Birth of a Nation

In May, 2002, the United Nations, which had been administering East Timor, turned over the reins of the country to its new, democratically elected government, finally delivering to the Timorese people the freedom they have voted for in 1999. Dignitaries from around the globe, including the UN Secretary General and the President of Indonesia, attended. Former President Bill Clinton represented the US.

The Timorese flag, which only years before would have been grounds for imprisonment or even death, was officially raised on the democracy for the first time.

Mary was on the ground during the celebrations, web casting the ceremonies with TheCommunity.com and United Nations Foundation. 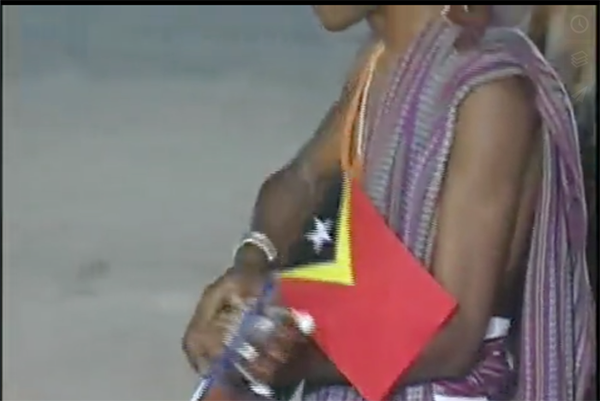 The charming opening ceremonies with performances by children from the different regions of Timor-Leste.

The FALINTIL were the resistance fighters, struggling to save their people from annihilation, at great costs. Far too many lost their lives. Tonight the surviving freedom fighters were honored on stage, in the presence of Kings and Presidents.

The national anthem, and the flag of Timor-Leste is raised for the first time, by Xanana Gusmao, the resistance leader who had been elected the country’s first President. For most in the crowd, it was the first time they had seen fireworks.